Current Teaching
Fall 2017, ECON 4531, Labor Economics
﻿Office: Hanson Hall 3-107
Office Hours: Thursday 2:30-4:30 pm or by appointment
Email: fazil001 at umn dot edu
Please use the moodle site for updates about the course. Main textbook (required) is Labor Economics, 7th Edition by George Borjas. The Natural Survival of Work, by Pierre Cahuc and Andre Zylberberg, is a supplementary book to learn the policies to deal with unemployment. Mastering Metrics, by Joshua D. Angrist and Jörn-Steffen Pischke, covers the empirical methods discussed in the class.
Some Important Topics:
References:
Labor Supply Estimation:​ ⇨ If one wants to estimate the labor supply elasticity, there may be a sample selection bias in the results for mainly two reasons: i) Individuals self-select whether to enter the labor market or not, ii) Analysts mostly trim the data in a non-random way. Different from the omitted variable bias, this bias is due to having missing observations and a nonrandom sample.

Labor Demand Estimation: ⇨ According to regulations in California, employees must be paid 1.5 times the employee's regular rate of pay for all hours worked in excess of eight hours. This regulation started to cover men after 1980. Exploiting this policy change, a difference in difference estimator is used to estimate price elasticity of demand for overtime hours.  ​⇨ In 1992, minimum wage increased in New Jersey while it stayed constant in Pennsylvania. Difference in difference estimator is used to assess the effect of minimum wages on employment.  ​⇨ Military mobilization of men during WW2 was not uniform across states and was highly correlated with change in female employment. To get rid of simultaneity bias, mobilization rates is used as an instrumental variable and female labor demand elasticity is estimated.

Equilibrium ⇨ The Mariel Boatlift is a mass immigration of Cubans from Cuba's Mariel Harbor to Miami in 1980 for a short period of time. This natural experiment provides an opportunity to analyze the effects of immigration on the labor market. ⇨ This paper includes a difference in difference estimation for a boatlift that was anticipated but did not happen. Results cast doubt on Card's paper. ⇨ Inference with difference in difference is discussed when the number of groups is small. Based on findings about confidence intervals, they explain seemingly opposite results in the Mariel Boatlift that did and did not happen.

Compensating Wage Differentials ⇨ More skilled workers have higher wage rates and better job amenities, so raw data implies a positive correlation between wage rates and job amenities contrary to the theory about compensating wage differentials. To get rid of the ability bias, one needs to keep track of individuals through time by using panel data.

​Returns to Education ⇨ More able students choose to get an education for longer periods. Since students self-select their education level, a raw estimate of return to schooling is going to capture the effect of schooling together with an ability bias. To estimate returns to education, Chetty et al. uses data from a randomized (controlled) experiment while Duflo uses data from a natural experiment, a school construction program in Indonesia. Lastly, Angrist and Krueger use birth quarters as instrumental variable to estimate the effect of schooling since birth quarters are related with educational attainment due to school start age and compulsory school attendance policies.

Some Graphs from Labor Economics Class: 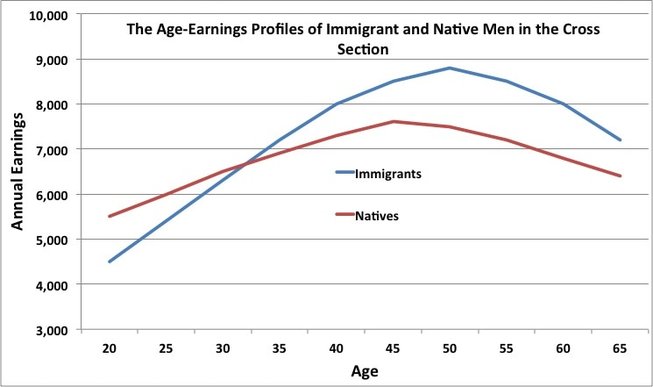 At first glance, it looks like immigrants' age-earning curve is steeper than the natives. Is this the case in reality? In this graph, there is a cohort bias due to cross-sectional data and also a selection bias since immigrants self-select to stay or return back. So, the truth can be the opposite of what you see. 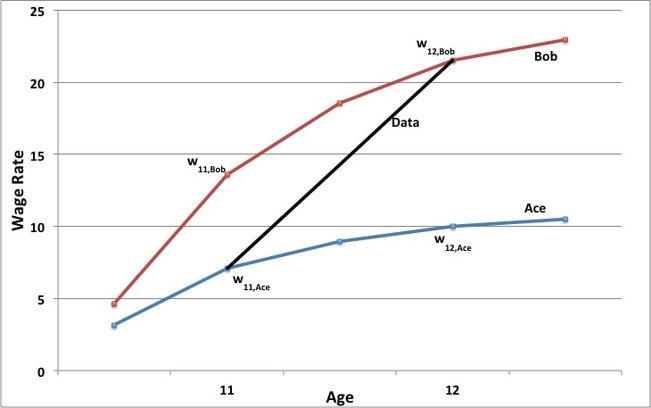 If one wants to estimate return to schooling, she is going to face a problem. Data shows the realization of the wage rates but not the counterfactuals. In the context of the left graph, Ace goes to school for 11 years and Bob for 12 years due to difference in the rate of return to education. Then, one can not know what would be the  wage rate of Ace if he went to school for 12 years or the wage rate of Bob if he went to school for 11 years. This is ability bias due to self-selection. There are ways to eliminate this bias. Angrist and Krueger (1991) is a well-known example of using instrumental variable estimation to measure the return to schooling.